Academic Reading Practice Test 11 (Passage 1 A disaster of Titanic proportions, Passage 2 Three dimensional films, Passage 3 Does water have memory?) You will get also some more academic reading tests with answers 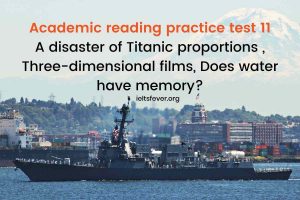 Passage 1 A disaster of Titanic proportions

At 11.39 p.m. on the evening of Sunday 14 April 1912, lookouts Frederick Fleet and Reginald Lee on the forward mast of the Titanic sighted an eerie, black mass coming into view directly in front of the ship.
Fleet picked up the phone to the helm, waited for Sixth Officer Moody to answer, and yelled: “Iceberg, right ahead!”The greatest disaster in maritime history was about to be set in motion.

In the theatre of the Ambassador Hotel in Los Angeles, on the evening of 27 September 1922, a new form of film-making made its commercial debut: 3-D1. The film, The Power of Love, was then shown in New York City to exhibitors and press but was subsequently not picked up for distribution and is now believed to be lost.
The following three decades were a period of quiet experimentation for 3-D pioneers, as they adapted to new technologies and steadily improved the viewing experience. In 1952 the ” golden era ” of 3-D is considered to have begun with the release of Bwana Devil, and over the next several years audiences met with a string of films that used the technology.
Over the following decades, it waxed and waned within filmmaking circles, peaking in the 1970s and again in the 1990s when IMAX gained traction, but it is only in the last few years that 3-D appears to have firmly entered mainstream production.

Passage 3 Does water have memory?

The practice of homeopathy was first developed by the German physician Samuel Hanuman. During research in the 1790s, Hahnemann began experimenting with quinine, an alkaloid derived from cinchona bark that was well known at the time to have a positive effect on fever.
Hahnemann started dosing himself with quinine while in a state of good health, and reported in his journals that his extremities went cold, he experienced palpitations, an “infinite anxiety”, a trembling and weakening of the limbs, reddening cheeks and thirst—” in short”, he concluded,  “all  the  symptoms  of relapsing fever presented themselves successively…”
Hahnemann’s main observation was that things that create problems for healthy people cure those problems in sick people, and this became his first principle of homeopathy: similar s/m/1/bus  (with help from the same). While diverging from the principle of apothecary practice at the time—which was contrary contraries (with help from the opposite)—the efficacy of similar similibus was reaffirmed by subsequent developments in the field of vaccinations.
Academic Reading Practice Test 11 (Passage 1 A disaster of Titanic proportions, Passage 2 Three dimensional films, Passage 3 Does water have memory?)