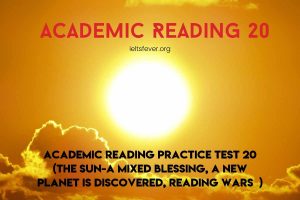 A．People in Western countries have very mixed feelings about the sun. On the one hand, it evokes memories of beaches, summer holidays and playful times. Children’s books often personify the sun as a smiling, happy face—typically contrasted with angry, moody rain clouds. In fact, the sun has such positive connotations that the descriptor ‘sunny’ refers not only to a state of weather but also to ‘cheery, cheerful, or joyous’ moods and dispositions amongst humans. On the other hand, many people fear the sun because of its association with cosmetic degeneration that can cause people to look much older than they actually are. Even more seriously, many people see the sun as a killer— this is because excessive sun exposure can lead to skin cancer which has a very high mortality rate. So is the sun our friend or a foe? The answers are complex and contradictory.

Passage 2 A New Planet Is Discovered

[Humans have long been fascinated by the possibility of extra-terrestrial life. Novels, films, and folk-tales have encouraged curiosity and speculation about what might be ‘out there’ in space. More recently, scientists have joined in on the collective wonderment after the first discovery by astronomers of a new planet—Giles 581g—that could almost certainly support such organisms. In fact, Steven Vogt—one of the two astronomers credited with discovering the planet—has declared that ‘the chances of fife on this planet are 100 percent’ and that he has ‘ almost no doubt about it’.]
Parental responsibilities and roles are very important for the parents to make their children prepared for the future. The way a father or mother treats a child affects greatly his/her future growth both mentally and physically. If parents fail to take great care of their children, then those children might go astray and will claim their parents for their misfortune. Every mother and father loves his or her children more than anything in this world and they expect them to be great persons and well established in the future. Throughout human history, mothers mainly take care of the children and do most of the works for the children. On the contrary, men are mainly busy outside the home to earn the living for the whole famil