Describe a piece of equipment you had repaired.

Well, the technology has spread its legs to every nook and corner of the world. In the present time, everyone uses electronic equipment in his or her daily life. I have also used a number of electronic products such as mobile phones, laptops, Juicer, microwave oven, smartwatch and so on. Every electronic equipment needs repair after some time. And here I would like to explain a situation when I had repaired the washing machine.

About a couple of weeks ago, my mother washing clothes of all my family members. During this task, the washing machine stopped. It was not working. My mom tried to switched-on it again but nothing happened. Then, she came into my bedroom and informed me about the problem.

Further, I switched on this washing machine and it again started working. I felt immensely glad after repairing it. Eventually, my mother also felt on the ninth cloud. She thanked me. A smile on her face made my day. I cannot express that moment in the words. So, that was the time when I had reapired a electronic equipment.

Well, There is every type of repairing shops available in the market. Whether you have a small mobile phone for repairing or it is an airplane, every kind of repairing is available nowadays. But sometimes, we repair some common items at own in the house like kitchen equipment, little problem of house sanitary, etc. Similarly, I also repaired one of the taps of our house. I would like to describe it briefly.

Our house was built approx. 30 years ago. So, all the electric and sanitary fitting is too old in it. We are planning to sell it and buy a new home. Because it starts creating any problems. As an illustration, recently, a tap of the bathroom in my house started leakage which and started wasting water in an excess amount. Describe a piece of equipment you had repaired.

I called the plumber and told him about the problem. But he told his price so high as it was not accurate just to repair a tap. So, I finally decided to repair it at y own. I gathered some tools which are necessary to repair any sanitary item. Then, I closed the tank outlet to stop the water coming through outlet pipes. Describe a piece of equipment you had repaired.

Then, I opened the tap and found where is the problem actually. After inspection of this tap, I found that this tap has become totally useless because it has completed more than its life years. Thus, I went to the market and came back with buying a new tap. I cleaned the joining I screwed the new tap. Then, I opened the outlet discharged and checked if there is any problem.

But the tap is working properly. Even its pressure was far better than before. I was so happy because I became successful to repair the things on my own. 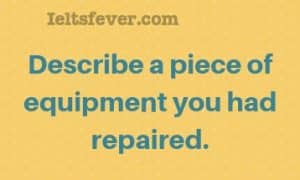