Describe a teacher who has greatly influenced in your academic life

Who is the teacher

I have met and liked several teachers in different years of my academic life. Among them Mr Arun. He used to teach us politics in our higher secondary level

The first attractive quality he had is his well-manner and eloquence. He was a great teacher and we all liked his style of teaching. We were very surprised to know that he knew a lot about politics and when he taught us, he told lots of relevant stories which made the classes more interesting. He did not believe in homework so he always gave tasks which we had to finish before our classes end. Because of him, we did well in the board exam in politics. Besides his great way of teaching, he taught us morality, the importance of education and how to value the morality and time

He influenced us to read books and politics books outside our syllabus which turned out to be very useful later in our lives. He inspired us to read English newspapers, journals, watch politics related channels, technology and politics related magazines. He was talented and very friendly to the students. He never turned down anyone whenever someone asked for his help and advice. He had an athletic body and we found him often participate in different outdoor games. He inspired us to do physical exercises and outdoor games

In short, he was an exemplary person and an ideal teacher whom most of the students liked and respected very much. I have been greatly influenced by his punctuality, honesty, talent and good behaviour. I still remember him and the advice he gave me

I consider myself lucky to get several very good teachers throughout my academic years. Among them, I’d like to talk about Mr Smith who was an extraordinary teacher, a really good mentor and who has a great influence on my education.

I met Mr Smith when I was in class 4 and he was our math teacher. Initially, we thought that he would be a moody teacher and we would have to be very polite in front of him. This impression came mostly because of his serious face and tidy dress-up. But soon we found that he is a very friendly person and teaches us very well. He never made things complicated and tried over and over again to explain something to us. He had a unique way of teaching. Seems like he would start an interesting story and later we would find that he would relate the math to the story. Thus everything we learned from him was interesting and that’s why we remember most of the theory and techniques of math he taught us.

I would say he has a great influence on my education because he made a very strong foundation on Mathematics. Later on, I studied Science and Mathematics was the most important subject. I have always been good at math and that’ mainly because of Mr Smith who had a major role in making the subject interesting to me. Before I learned math from Mr Smith, my impression of math was not good and I considered mathematics to be a very difficult and uninteresting subject. But his teaching and influences changed my way of thinking about math and later on, math became my one the most favourite subject.

Academic reading practice test 55 Scratching the Surface THE ANDERTON BOAT LIFT Life, but not as we know it

Academic reading practice test 53 The power of light, The Ring Cycle, To MBA or not to MBA 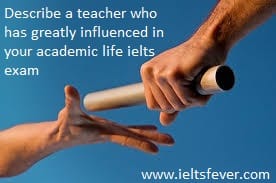