In many parts of the world, children are given more freedom than in the past. Is this a positive or a negative development?

The world is changing fast and so are the rules and the norms of society. When grown-ups today compare their childhood with that of today’s children, they find that today’s children have more freedom than what they used to have. I believe this situation is largely positive.

There are many advantages of children enjoying more freedom. They grow up quicker than their parents did. This produces more liberal, mature and adventurous adults, which obviously has an effect on society in the long run. Today’s children follow the global culture, which is the amalgamation of the good points of the various cultures of the world. Consequently, countries progress more rapidly because of this shedding of many traditional ways of doing things and becoming freer and more open societies. For example, in India, if today’s youngster wants a dowry free marriage, he will go ahead and have it against all odds, where as earlier youngsters could not take a stand against it as it was considered customary.

Furthermore, today’s children have the power of the Internet and the satellite TV in their hands. Today’s young generation is the most well informed generation than ever in the history of mankind. They know what their parents and grandparents do not know. They have oceans of opportunities in front of them, which they want to explore. They adopt careers of their choice and do not hesitate walking on the untrodden path. They are not afraid of taking risks. For instance, earlier children were pressurized by their parents to take up medical, non-medical or commerce streams, but today’s children are going into computer animation, computer gaming and other fields, which were unheard of before.

On the other hand, sometimes this freedom can be detrimental for children. They like maturity and fail to see the far-reaching consequences of their actions. It is also the time when teens make mistakes and need someone there to guide them understand what went wrong, take a step backward, analyze, and again take a step forward. Freedoms should come in small steps so that the teens are ready to move forward having proven their ability to handle each small movement. Too much freedom can end them in bad company and also drugs.

To sum up, it can be reiterated that freedom enjoyed by children is, by and large, a good thing, but the onus is on the parents to prepare them for this in small steps, so that the negative side of this excess freedom does not go against them. 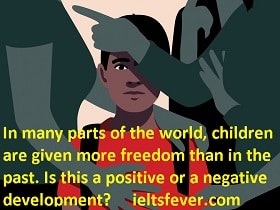