Internet Users as a percentage of the population. 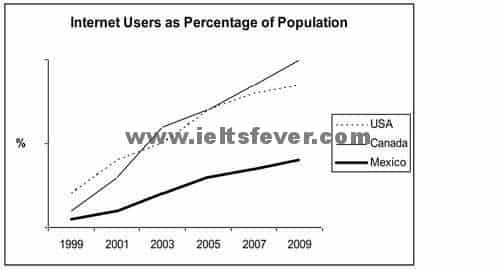 The line graph illustrates the information regarding the proportion of the population, who used the internet in three different countries namely, The USA, Canada, and Mexico from 1999 to 2009.

Overall, it can be clearly seen that the percentage of internet users in all three countries increased dramatically throughout the given time period.

It is interesting to note that, Canada had the highest internet users. At initially, around 15% of Canadian people used the internet, but the highest Hike was seen in the proportions of internet users in Canada, with around 100% of a population internet in 2009.

This graph shows a comparison of internet usage between three countries USA, CANADA & MEXICO. From the year 1999-2009, there is an internet usage % rise in population.

Looking into the scenario of Mexico the dark line shows that the user has been slow compared to Canada & the USA from the year 1999-2009, which shows that usage among people are is less & they are less tech-savvy.

Coming to Canada the usage of the internet has started slow & sooner or later till 2009, the percentage rise in population is very good till 2009 compare to Mexico & the USA.
The USA has started using the internet very fast in 1999 & till they reach to 2009 the usage has been slowed down, compared to Canada.

This is the end of ACADEMIC  writing task 1 (Internet Users as a percentage of the population.)