From my everyday experience and observation, I think that artists, as well as scientists, brings many benefits to society. It is a controversial question of whether the contributions of artists are more or less than the contributions of scientists to society. For several reasons, which I will mention bellow, I think that both types are valuable, priceless and irreplaceable for every society.

The contributions of artists to society are very essential. Art forms people’s spiritual sense, their views, and personalities. People learn history, the traditions of their country trough the art. We also watch movies that entertain and at the same time extend our range of interests. Another important aspect of this is that art is an ancient means of communication. In old times people depicted the herds of mammoths on the walls of their caves. They performed different rituals around the fireplace asking their gods for health, good harvest and weather. Our language is a result of people’s need to communicate.

On the other side, the contribution of scientists is could not be exaggerated. All humankind is indebted to the scientists because of their work and achievements. Scientists make our life easier. We have cars and airplanes to move fast from one place to another. Also, We have microwaves and a bunch of preprocessed food to make cooking much easier. We have different devices that simplify all we do. Finally, scientists are making great achievements in medicine that make our life longer and happier. Nowadays people have a great opportunity to do many things faster through the use of computers.

To sum up, I believe that artists nourish our souls when scientists and technology feed our minds. So, we can not eliminate or underestimate one of them 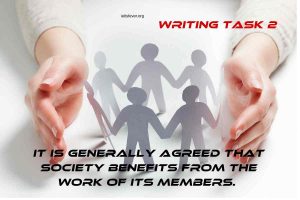