News stories on TV and in newspapers are very often accompanied by pictures. some people say that these pictures are more effective than words. what is your opinion about this?

In our daily life, we see many photos or images of news events in newspapers and on television. some people say that the images are more effective to tell the truth than words. basically, I agree with this idea, but there are some different ideas as well.

The idea that showing pictures is the effective way is obviously true because we can see a lot of photos and images in the media. we can see the atmosphere, facial expressions, and background scenarios from the photos. everybody believes that watching is more important than hearing.

In addition, young people do not like reading recently. they are used to collecting information from the internet rather than books. for the young generation, images should be much more effective than reading every single letter, needless to say.

However, photos cannot tell more than they show. you can see a facial expression of a murderer in the picture, but you never know his history or habits without reading an investigation about him. when the east Japan earthquake occurred, I read a lot of newspaper articles about the family of victims. there are a huge amount of stories of children who lost parents with the tsunami and a man who lost his wife with a baby in her tummy, and so on. at that time, I felt strongly that words are much more effective than pictures.

In conclusion, if I am asked the question which more effective is, pictures or words, I would say pictures. but we should be more flexible to accept reading words as well as watching images, not escaping from letters.we have to try to collect the balanced information from media, not only by the pictures but also valuable words.

The only way to reduce the amount of traffic in cities today is by reducing the need for people to travel from home to work, education, or shopping. to what extent do you agree or disagree? 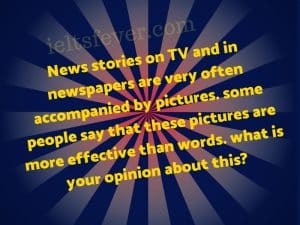