It is indubitable that traffic congestion is a growing anxiety in many parts of the world. In order to mitigate this problem, some suggest that roads should be fabricated. Others, however, believe that public transportation, such as trains and subway lines should be constructed. Both of these methods will be analysed below. I, personally side with the latter view.

On the one hand, expanding the road network could naturally ease traffic jams. Obviously, more and more private vehicles would be accommodated and commute time would reduce. This strategy would also be good from the economic perspective also. The cost of road construction is much lower than that of subway lines. The money thus saved can be used for other key sectors, such as healthcare and education.

On the other hand, construction of mega rail systems is a more effective method to improve traffic condition. There are compelling evidences to support the investment in such public transportation. In countries where subway systems have been made up to standard, the number of private vehicles has come down. Trains can carry a much larger number of passengers than any other form of transport. Additionally, city dwellers can save time and also money on traveling expenses. For instance, in New  Delhi, many people now prefer to travel by Metros rather than their private vehicles because of the comfort and the quality.

I personally believe that in places where the budget of the governments is constrained, a combination of both approaches is needed. For example, in India, the road networks are being expanded in almost all places, but subways lines are also being added slowly and steadily in many cities. In the foreseeable future, the expanded road networks are also going to prove inadequate, and so subway lines would remain the only solution.

To conclude, both methods discussed above can provide relief on our traffic congestion. However, it is my opinion that the method to build trains and subway makes more sense in the long run. 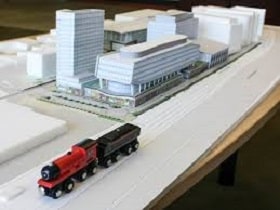