Some people think that there should be strict laws to control the amount of noise a person makes because to people.

Discuss the advantages and disadvantages.

Laws have been making by the public sector for the smooth running of a nation. a camp of society believes that noise ought to be controlled by making some solid laws in order to decline the voice disturbance to human beings.

According to my point of view, the amount of noise can be controlled by strict rules because it has many advantages and few disadvantages towards human beings. I will elaborate on its benefits and demerits in the following paragraphs.

The first and foremost merit of strict laws against noise is the protection of people`s health. In other words, patients and premature babies need more rest or sleeping time rather than a healthy person. as a result of it, they will heal rapidly from their worse condition in a calm area.

Secondly, solid rules against high volume enable manpower to concentrate on their work as well as fruitful for juveniles to do Study. for instance, if in the class, one pupil makes higher noise, then it can lead to less concentration in studies for other students.

On the other hand, the first demerit of it is unfairness with the right of human beings.  If authority will make strict rules against noise, then it can lead to the devastation of freedom of mankind. because sometimes a law in favor of a segment of society can become a cause of injustice for others. moreover, it is unnecessary due to the advancement of technology. in other words, if one person wants to listen to music which may disturb to others such as patients and learners, then he can us earphones for enjoying songs.

To conclude, every coin has two sides. I believe, only that laws ought to be made which are helpful for the whole society. because without proper security of its merits and demerits, we use rules lead to injustice and unsatisfaction for some persons.

Many people are optimistic about the 21st century and see it as an opportunity to make a positive change in the world. To what extent do you agree or disagree with their optimism? What changes would you like to be made in the century? 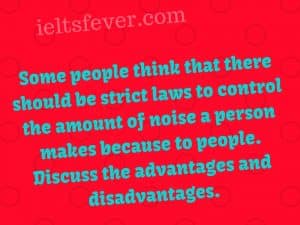