Television has had a significant influence on the culture of many societies. To what extent would you say that television has positively or negatively affected the cultural development of your society?

The technology has spread its legs to every nook and corner of the world. There are numbers of channels available on the television which give you essential knowledge as well as put impact on every human’s life. a camp of society thinks that television influences to a culture of communities. according to my point of view, television affects the cultural development of society in both positive and negative way.  I will elaborate it in the following paragraphs of this essay.

The first and foremost positive impact of television spreads encourages in numbers of society about cultural events celebration. In other words, nowadays the events which are related to cultures are celebrating as well as presenting in a good way on different levels such as on state level or on broadcast on television through nation channel of a nation. As affected by this activity and they also start their cultural fests on the local level such as in their towns and in villages. This entire activity brings and their traditional culture. To add to it, through television persons can also present information about their own cultures to the other people who perhaps lives in the distinct parts of the globe. By this, all world can know about all cultures and traditions.

On the contrast, television also puts a bad impact on the members of a community.  It is inevitable that presentations related to several cultures and customs broadcast on television through different channels, So all human beings watch these acts. Then they just want to become like alien masses and adopt foreign customs, traditional cultural activities and so on. as a result, they forget their own cultural and indulge in another tradition.

To conclude, every coin has two sides. If television spreads information about cultures to increase their development, then it also can become a great cause of a precious culture is death.  I believe television ought to present only that events which might be proved fruitful for development of all cultures.

https://www.facebook.com/ieltsfever Describe a piece or a set of furniture you have seen or you use 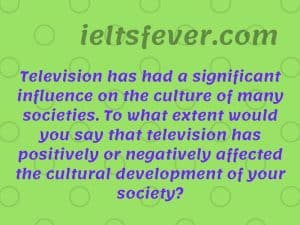