Laws are the basic principles of a society.All people are abiding by some rules and regulations for a smooth running of the country.New laws are introduced in society and old laws are demolished according to their needs. Administration of government is responsible for making laws and implement on people in society.The person who breaks these laws and does some illegal activity have to face punishment according to the intensity of this act.Today I would like to talk about a new law which I would like that government must interduce in society.This law is related to traffic and pollution problem.As you know, the population of the country is increasing day by day and rush of vehicles is also increasing side by side.So we have seen a big rush of vehicles on the roads which not only waste people precious time but create harmful pollution also which leads to the health problems in the people.So, the need of the time is to make some laws to control the traffic problem.The government should have to follow an odd and even formula for the vehicle.It means that vehicles of particular odd numbers and the vehicles with even numbers on another day.This would help in controlling traffic problems to some extent. The people who would keep their vehicles in their houses could use the public transport as an alternative.

Also, Read /describe something you bought according to an advertisement you saw/

Also, Read a leisure facility you would like to have in your hometown/ 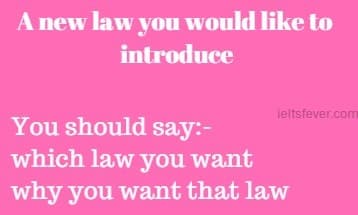