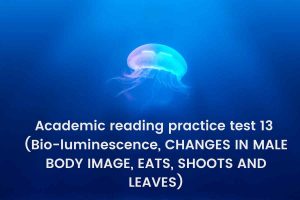 A. In the pitch-black waters of the ocean’s aphotic zone – depths from 1,000m to the seafloor – Rood eyesight does not count for very much on its own. Caves, in addition, frequently present a similar problem: the complete absence of natural light at any time of the day.

This has not stopped some organisms from turning these inhospitable environments into their homes, and in the process, many have created their own forms of light by developing one of the stunning visual marvels of the biological universe – bioluminescence.

A. The pressures on women to look slender, youthful, and attractive have been extensively documented, but changing expectations for women’s bodies have varied widely. From voluptuous and curvy in the days of Marilyn Monroe to slender and androgynous when Twiggy hit the London scene in the mid-1960s, and then on to the towering Amazonian models of the 1980s and the “heroin chic” and size-zero obsession of today,

it is not just clothes that go in and out of fashion for women. The prevailing notion of the perfect body for men, however, has remained remarkably static: broad shoulders, a big chest and arms, and rippling, visible abdominal muscles and powerful legs have long been the staple ingredients of a desirable male physique.

The title of Fats, Shoots, and Leaves refers to a famously misplaced comma in a wildlife manual that ended up suggesting a panda rather violently “eats, shoots and leaves” instead of eating shoots and leaves.

The author of this book, journalist Lynne Truss, is something akin to a militant linguist, dedicating this “zero tolerance” manifesto on grammar to the striking Bolshevik printers of St. Petersburg who, in demanding the same remuneration for punctuation as they received for letters, ended up setting in motion the first Russian Revolution.