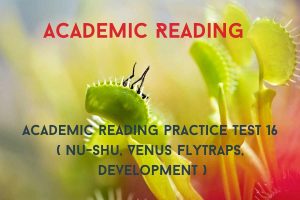 A. It is sometimes said that men and women communicate in different languages. For hundreds of years in the Jiangyong county of Hunan Province, China, this was quite literally the case. Sometime between 400 and 1,000 years ago, women defied the patriarchal norms of the time that forbade them to read or write and conceived of Nu Shu — literally, ‘ women’s language ’ — a secretive script and language of their own.

Through building informal networks of ‘sworn sisters’ who committed themselves to teach the language only to other women, and by using it artistically in ways that could be passed off as artwork (such as writing characters on a decorative fan), Nushu was able to grow and spread without attracting too much suspicion.

Prom indigenous myths to John Wyndham’s Day of the Triffids and the off-Broadway musical Little Shop of Horrors, the idea of cerebral, carnivorous flora has spooked audiences and readers for centuries. While shrubs and shoots have yet to uproot themselves or show any interest in human beings, however, for some of the earth’s smaller inhabitants – arachnids and insects – the risk of being trapped and ingested by a plant can be a threat to their daily existence.

Easily, the most famous of these predators is the Venus Flytrap, one of only two types of ‘snap traps’ in die world. Though rarely found growing wild, die Flytrap has captured the popular imagination and can be purchased in florists and plant retailers around the world.

Shortly after World War II, ‘development’ as we now understand it was set in motion. Western governments and donors poured money into new agencies that set about trying to stimulate the economies of underdeveloped countries. Because of this emphasis, it is now widely regarded as the Growth Model.

Although we might expect poverty reduction to be the central objective, planners at this stage were primarily concerned with industrial development. It was hoped that the benefits of this would trickle down to poor people through raising incomes and providing employment opportunities, thereby indirectly lifting them above the ascribed poverty threshold of a dollar a day. The weaknesses of these assumptions were revealed, however, when poverty rates and economic growth were found to rise simultaneously in many countries.