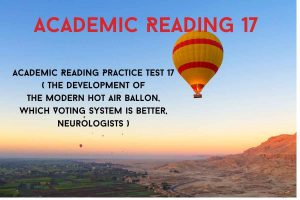 Passage 1 The Development of the modern Hot – Air Balloon

The modem hot-air balloon is constructed by suspending a wicker basket underneath a large bag of nylon fabric, known as an envelope. The wicker basket carries the balloon’s pilot, any other passengers, and the propane tanks that provide the balloon with a source of fuel. The propane tanks are connected by hose to a pair of burners, which are located between the basket and the envelope.

Passage 2 Which Voting System Is Better?

Voting is often portrayed as a very simple activity – all that is required being a list of names, boxes, and a pen with which to tick the preferred option – but it is actually an intricate process that can take many different forms on which everyone from mathematicians to political scholars, interest groups, politicians, and voters often have divergent opinions. Two of the most popular of these voting systems are known as First-Past-the-Post (FPP) and Mixed-Member Proportional (MMP), and they have quite different features.

Neurologists tend to divide the experience of love into three distinct categories: attraction, lust, and attachment. The combination of all three can make for an intoxicating and lasting bond, but they are not always experienced together. Frequently, for example, we lust after those with whom we have no desire of having a long-term relationship; at other times, we feel ‘attached’ to people in the sense of being drawn to them emotionally or spiritually, but not drawn to them physically.

It is accurate to describe these as ‘stages’ of love – lust tends to come first, then attraction, which lasts for months or years, and finally attachment, which can keep people together for decades. These are separate chemical substrates, so they can overlap; however, evidence suggests that attraction has a limited lifespan.