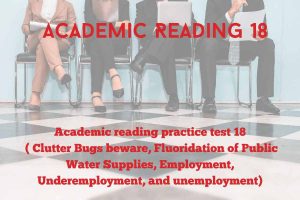 Water fluoridation is the process of releasing small amounts of fluoride into the public water supply as a way to reduce dental health problems. The process of reducing tooth decay through fluoridation is clearly understood, and research confirms water fluoridation’s effect on limiting instances of tooth decay. Nevertheless, fluoride is not harmless in all quantities. At levels moderately above those desired, it can result in something known as floozies, and at very high levels acute fluoride poisoning can occur.

The last few decades have been turbulent for the global employment market, particularly in post-industrial countries. Around one-third of the OFCD labor force is unemployed, and global unemployment figures reached a historical peak of 185.9 million workers in 2003. Beyond this, a phenomenon is known as  ‘underemployment’ is becoming the normative practice in many industries.

Once considered a passing aberration, underemployment is now an entrenched and seemingly intractable feature of the economy that involves people scraping by in precarious and temporary forms of work—typically casual, seasonal, or fixed-term work and often on part-time contracts.

Many scholars have offered their own theorizations of the employment crisis and put forward some possible solutions. Certainly, almost all of these understandings differ over the finer analytical details, but more significantly there is almost no consensus around what anchors the disruptive changes to employment patterns. A majority of theorists stick to traditional models of unemployment, and argue that policy-makers in the West should now focus on finding salvation in the ‘knowledge economy’, but others find this to be a mythical possibility. Broadly, it is too soon to say who is the closest to being correct, but history is sure to pick a winner.