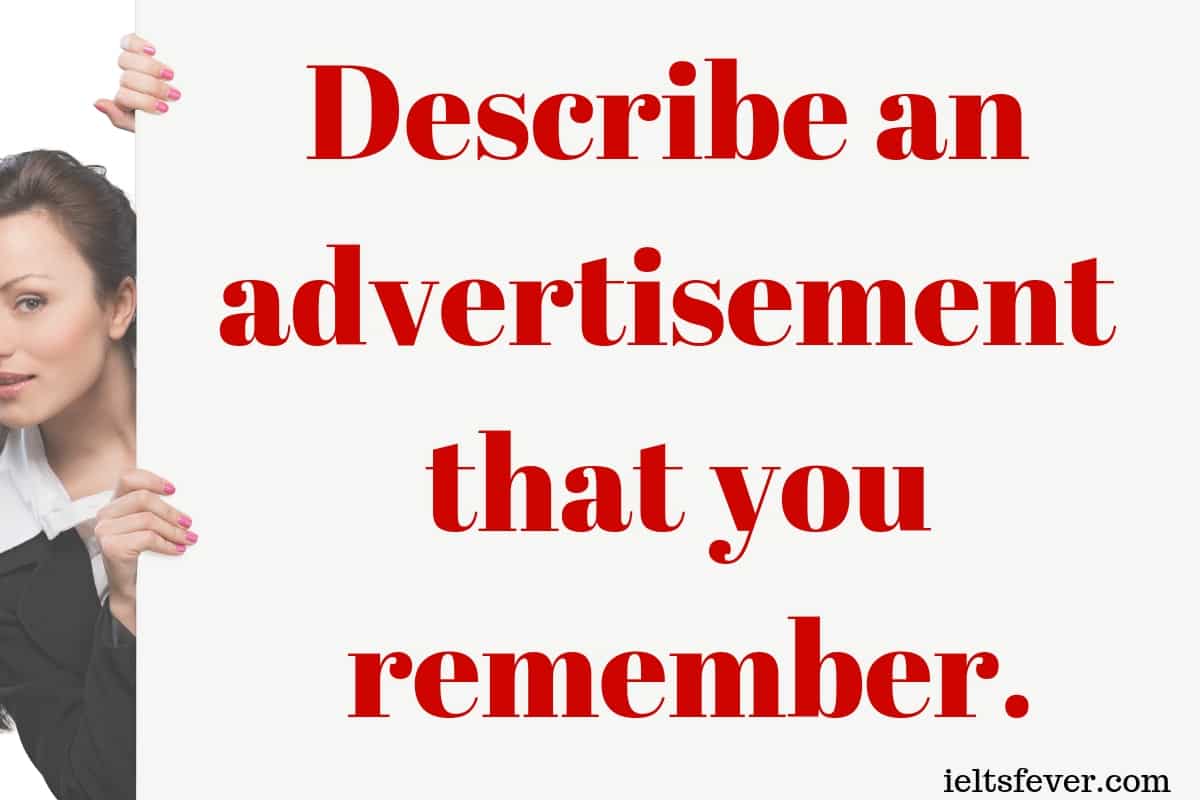 Describe an advertisement that you remember

Well, I think in the present scenario, advertisement is the best tool for marketing. With the help of these advertisements, we know about the different types of products which are launched in the market.

In fact, nowadays we are flooded with a lot of advertisements through t.v, newspapers, magazines, and billboards. Here I would like to talk about an advertisement that I saw on television approximately 5 years ago. This advertisement is about a soft drink ” Mountain dew”.

In this ad, a young boy is trying to learn “parachute jumping” which is the most dangerous and adventurous sport in the world. In this ad, he is trying to jump from an aircraft wearing a parachute. Firstly, he is feeling very scary and takes his steps back. However, his friend motivates him to jump then he gathered all his courage as well as, confident. after getting a lot of confident, he drinks “mountain dew” and jump from an aircraft. Interestingly, he is lending safely in the end.

I remember each and every scene of this ad because it broadcast repetitively in between daily soaps. Secondly, the model of this ad was Salman Khan who is my favorite actor. Apart from it, the tag line of this ad is quite attractive and fascinating. I remember this tag line “Dar ke aage jeet hain” which means ” fear brings victory”.

On that time when I heard these lines the first time, I repeated it so many times because I feel relaxed and confident after sung those lines. I also believe that nothing is impossible in this world if we put or great effort then, we definitely achieve success. All in all, this advertisement gives a beautiful message and I remember it yet.

Well, in the modern era, everyone knows all companies promote the products with the help of advertisement and, advertisements are available in different sorts of a form like as, advertisement on newspaper, on internet and television as well, I always prefer to read and watch an advertisement on every place because it is good way to collect the latest information.

But, here would like to talk about an advertisement which I remember well. Interestingly, it is one of my favorite which is related to the beauty salon. I remember, a few days ago, I was watching the local news channel at home and, during the commercial break I came across the advertisement for the latest beauty salon.

In fact, in this advertisement, one young girl full explained the name, address and, service also such as body wax, body massage with the latest technology, real fruit facial, permanent eyeliner and makeup also in just 10,000 only.

After it, in this advertisement, a girl visits there and, she explains her problem to the recipients girl and, shows her face which is full of pimple and blackheads. After that, recipients give the consolation to that girl then, a couple of hours, she looks like a fully change her face almost cleaning. That part is very interesting and that is the main reason this advertisement influences me.

With it, I also visit there with my friend and, we tried that package offer. Now, it is a famous advance treatment salon in my town.

Question:- where usually do we see adverts?

Answer:- In the modern era, everyone busy in their works and, they do not have enough time to see ads but, we normally see advertisements around us like on television, in the newspaper, on the internet as well as, cell phones.

Answer:- Well, we are living in a modern era where there are a plethora of advertisements around us. for instance, billboards, tv, radio, and son. these ads help us to know what is going on in our surroundings. Adverts also give information about newly launched products in the supermarkets.

Question:- Are any advertisements at school?

Answer:- Well, sometimes restaurant and fast food chains normally offer free treats in the form of coupons to students who receive the best grades in their school reports as well as, sometimes, local news channels heir school students to promote the channel so, these types of way are popular to promote their products and other things.

Answer:- Yes definitely, ads related to preserved food, books, music bands and so on are at school where these leave a profound impact on the minds of juveniles. For example: perhaps some big companies which usually donate money to the charitable trusts of few numbers of schools, present their product 8 advertisements over there.

Question:- Do you think it is bad for children?

Answer;- According to my viewpoint, no because it is a good way to learn about new things which launched in the market as well as, latest technology also. With it, kids will easily grow and adjust in this modern era. Moreover, it is the responsibility of parents they know everything about their children, which things kids watch and noticed around the home and school.

Answer:-Well, according to me, the provocative ads are not relevant for children because juveniles are not enough mature during their childhood. they just copy those things which they see on television or in another place. so, such the ads are not good for kids because these things might lead to injury or crime or complications.

Question:- What do you think is the purpose of advertisements?

Question:- What kind of advertisement do you like the most?

Answer:- I love to watch all types of the advertisement but, I mostly prefer to those ads which have a short story behind as well as, related to latest cloth brands, beauty products, and mobile phones because of I usually but these products.

Question:- Are there some inappropriate advert like that of a condom?

Answer:- yes, of course, there are a number of inappropriate adverts broadcasting on the television. For example: in an advertisement, a youngster uses perfume and many girls attract him. apart from it, a boy drinks and he becomes able to drive his car in a horrible situation like a  tsunami. But, on the other hand, a segment of society believes that such ads like a condom are not provocative because it plays an instrumental role in sex education for growing children.

Question:- Why does the government allow such ads?

Answer:- Well, according to my perspectives, governments allow these adverts only to earn a huge amount of money as well as, models who hire by companies for inappropriate ads also earn money in high quantity.

Question:- Do parents complain about it?

Answer: Yes definitely, parents should complain about provocative ads such as condom because these types of advertisements leave a bad impact on children’s minds. As I told you before, kids are not enough mature about such things and it could be proved harmful to them. Besides it, parents should keep a vigil on their kids. Provocative adverts have no place in a civilized society.discuss.