Competitive Sports Like Football Are Considered to Add a Lot of Value by Bringing People of Different States and Nationalities Together. Yet Some People Argue That These Sports Divide People on the Basis of Nationalities and Age Groups. What is Your Opinion? Write About Each View and Then Describe Your Answer Supporting It With Relevant Examples From Your Own Experience.

It is irrefutable that competitive sports such as The Football World Cup and The Olympics are watched by millions of people worldwide. There are divided opinions on whether these games unite or divide people on the basis of age and nationalities. In the following paragraphs, I intend to discuss both views followed by my opinion.

Sports provide people with entertainment and something to get excited about and they are topics for conversation. They provide a common bond for complete strangers and a common team to cheer for. For example, Brazil has a high rate of unemployment and crime because of which Brazilians have low self-esteem. But, when the world cup starts, then the people forget all their problems. An amazing feeling of pride and patriotism comes in them and they cheer their team together.

The Olympic games are one of the best examples of how sporting events can bring people from different nations together. In ancient times, the Greeks and Romans would interrupt battles to participate in games. Even India and Pakistan forget their differences on the cricket ground and the players embrace each other after every match.

On the other hand, there are many examples of violence and conflicts that such games have brought about. Football hooliganism or football violence is well known to all. The 1985 European Cup final between Liverpool and Juventus in Heysel Stadium led to the death of  39 supporters. Any wrong decision by the referee can lead to violence. A lot of emotion and passion are involved and all reason and logic fly out of the window. That is why some people hold the opinion that such games divide people.

To put it in a nutshell, I pen down saying that competitive games generally bring people together. There are a few incidences when over-patriotism prevailed and people got divided but such incidents can be counted on the fingertips. 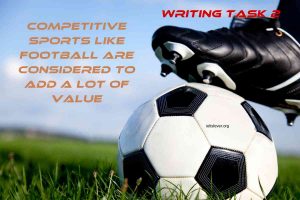