who this person is

Well, India has produced many famous artists time to time.  And choosing one of them is a tough task.

However, I would like to speak about Mr. Amir Khan. He is a leading Hollywood superstar and I am a huge fan of him.

After watching this show, I became even a bigger fan of him.

I think he is doing a wonderful job as an actor at the moment.  I would like to wish him good luck for the future as well.

Do you agree or disagree with the following statement? Television, newspaper, magazine and other media pay too much attention to the personal lives of famous people such as public figures and celebrities IELTS EXAM 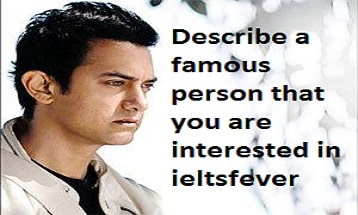