Why were you not allowed?

What did you want to do with your cell phone?

well, in this modernization would, everyone like the cell phone, the cell phone is used to call everyone as well as yo uses the internet .but here, I would like to talk about a situation when I was not allowed to use the cell phone. i am student of B.C.A 6th semester. last Monday .it was my examination of subject “system analysis and design” also called Sad”. I was held at L.L.R memorial college, Dhudike (moga). these was , the cell phones were not allowed in the examination . hall or Room .when I visited into Examination hall, then I had a cell phone and I had forgotten to switch off it .when, one hour had passed my phone was ringing and the examining teacher asked us about why you have a cell phone. I felt very bad and embarrassed .then, I gave my cell phone to examine teacher and got the book after the examination. these are also one recession to prohibit cell phones in the examination room that is, the students have cheated in the exams checking information on the internet according to the questions which appeared in the exam. so I remember this situation in my whole life

Describe a program or app on your computer or phone 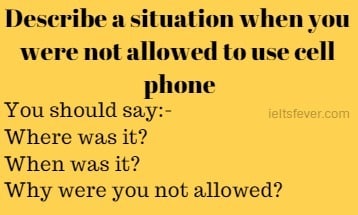