Well, there are many persons in my to-meet list such as Milkha Singh, P T Usha, Anju Bobby George, and so on. I want to meet them all. But here I would like to talk about a famous foreign celebrity named Usain Bolt. I describe him briefly.
He is a famous athlete from a small country named Jamaica. Actually, he is Jamaican sprinter named Usain Bolt. He is born on August 21, 1986.  Often considered the best athlete in the world.

In addition to it, He had won three gold medals at the 2008 Olympic Games in Beijing, China, and becoming the first man in Olympic history to win both the 100-meter and 200-meter races in record times. Also, Bolt won three Olympic gold medals at the 2012 Summer Olympic Games in London.He ran the men’s 100-meter race in 9.63 seconds, made a new Olympic record. This record makes him the first man in world history to set three world records in Olympic competition.Interestingly, by the grace of God,  He made history again at the 2016 Summer Games in Rio and won gold medals in the 100-meter and 200-meter race and 4×100-meter relay. He is a winner of 9 gold medals over the 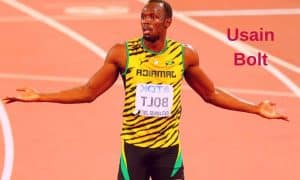 course of his Olympic career.
Describe a sports athlete.
If I talk about his qualities which differentiates him from other ones. Then, he is a very kind-hearted person. He is also down to earth person and respects his followers.

Apart from it, he has made a charitable trust which works for the goodness of orphan children. Also, this charitable Trust helps those children who want to become an athlete but they don’t have any method to get training. So this trust helps them.

All in all, Usain Bolt is one of my favorite players. If I get a chance to meet him, then definitely I will do it.

Follow UPS–
Do sports players gain more respect than other celebrities??
Have you ever meet with the Sports Star???
Do people follow their favorite celebrities???
Why people like to do this thing??
Do you follow your favorite star??
What you think, do the government should provide protection to famous celebrities???
Facebook Page