Describe your latest interesting travel in detail.
When and where you go?
Whom you go with?
What things you do?

I love traveling. I have traveled about 3-4 times every month .at the time of traveling, I have met with different kind of people in my life. but I would talk about my interesting travel . lost month, was traveling from Delhi to Ludhiana via bus. my one friend was with me.when I started my journey then an old aged person was also traveling in the bus .he was sitting just about near by to me .when the bus left the delhi , then he requested me to open the window, I done that then he was asking me about my self . an this talk , he told me about himself that his name is deep singh and he was also going to ludhiana .he told me that he had the head of department of punjabi in punjabi university patiala he started his conversation on history and literature of punjab . because he has done the doctorate in Punjabi literature. he was the time of partition in 1947. he talked about punjab before the partition and told how people living together with love and cooperation. but after the partition punjab divided into East Punjab and West Punjab which hurt him greatly .hetold me that the people of Punjab are full of aggression courage and bravery .this conversation was too interesting because I got a chance to learn something . just because of this interesting talk, my traveling became very interesting.
(Harpreet Kaur million)

food travels thousands of miles before it reaches the customer

Some people believe that air travel should be restricted ielts exam

Aircraft uses more fuel than cars and produces more pollution. Some people suggest the non-essential use of aircraft like international travel should be discouraged. Do you agree or disagree? 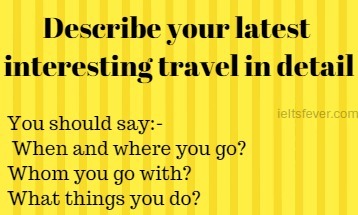