what was the situation?

why did you need to use imagination?

what were the difficulties?

and explain how you felt about it?

well, imagination is a wonderful thing .we all use the imagination in our day to day progress .but I would like to talk about a situation when I used my
imagination days ago, I visited my friend’s house . his house is so beautiful .after spending some time with my friend, then I come back to my house. I went to my bedroom .but my mind did not give up the picture my friend’s house. then I started imagining about my new home which may be very beautiful.I took a pencil and a paper and started to draw the infrastructure of my home imagined that my house would be big and the trees would grow around this house my home’s kitchen should be well designed and beautiful my bedroom would be big rather than all other rooms and it would also be attached with a bedroom. one window should be in my room from which i will see my kitchen garden . I will prefer to live in this home with my family. I was just imagining my future house, then my mother comes and shakked me. my all imagination had gone waste. one thing which I went to tell you that realty is realty and “distance dreams sound sweet”

We all use imagination in our day-to-day lives. Imagination is a wonderful thing. When we read a book or hear a story, we imagine the characters. We also imagine the situation in our minds. In happy times we imagine good things. In sad times, all negative thoughts come in our minds. Here I would like to talk about a situation when I used my imagination. Once I took part in a painting competition in my hometown. I was in 10th class, and I represented my school in this competition, which was organized by a local NGO, the J.C. club. We had to use our imagination to draw and paint a picture on the theme of  Drug addiction. I knew that if we take addicting drugs, our bodies become lifeless and our lives become meaningless. I used my imagination and drew two skeletons – one smoking a cigarette and the other injecting itself with a drug. I wanted to convey the message that narcotic drugs can turn us into skeletons and our end is near. I was overjoyed when my name was called out as the first prize-winner. All my friends and teachers who were there congratulated me. Our principal announced my name in the morning assembly the next day and everyone clapped for me.

Some people believe that reading stories from a book is better than watching TV or playing computer games for children. To what extent do you agree or disagree? IELTS EXAM

Films can have an effect on the children’s education and teach them many things. Do you think it is always a positive influence? Discuss. 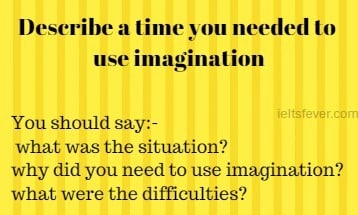