The answer to each and every question is mandatory. Send your answers on [email protected] with your name, city along with question( in the subject field of email), and must send us the answer within 24 hours of question.  We will not respond to late answers and without a name, question no answer will be considered.

The table below describes the number of employees and factories in England and Wales from 1851 to 1901. 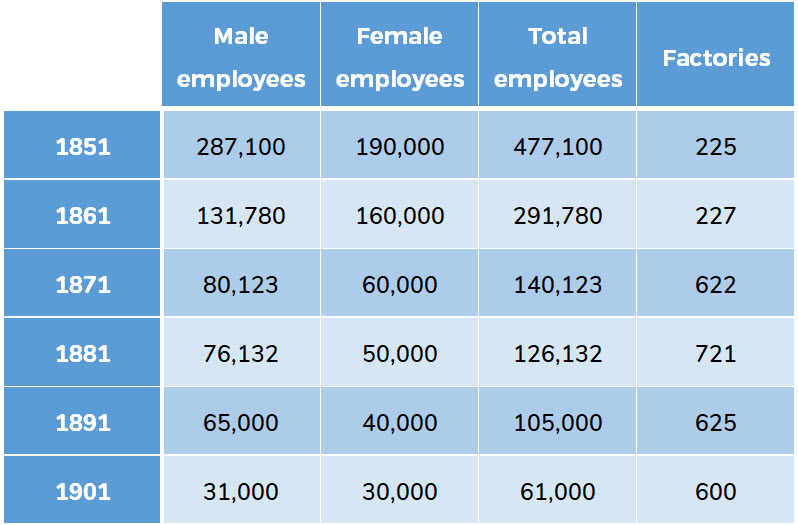 Dear kapil,
Hope this letter finds you in radiant health and the best of the spirits. I am writing this letter to apprise that there is an imperative public event ‘Test Of Vadodara’ planning in a couple of weeks after in my home town.
Test Of Vadodara is a very prominent event in our town and people from all walks of life visit this event not only from Vadodara but also surrounded tiny villages as well. The event will be organized by local authorities in Laxi Garden beside the city center. This event has been divided into manifold sections such as food, entertainment, and many more.
I would like to draw your attention that to participant or part of any one of the sections there is an open tender. As I know you are in the same kind of business. It would be a great help to you and organizer too as they are looking, such profound professional event organizers.
I have attached the document which covers all detailed information about the same. If you are interested then you may contact Mr.Patel, his contact detail is also included in the attached document.
Hoping to hear from you and let me know if you need any further information.
You’re loving,
Heena Kochhar

You should write at least 250 words and spend about 40 minutes on this task.

Some people think that education is useless. Others think that it is important. Discuss both views and give your opinion.

Answer- One of the most conspicuous trends of a globalized world is education.some individual believes that education is helpless for students while other argue that it is essential for better future.there are both bright and dark side of this notion and will delineate the rationales behind it in ensuing paragraphs
First and foremost, let me commence by stating the preponderant aspects associated with education. In this 21st century, many children are attracting to the internet which is good at a certain level. There are many career opportunities on internet platforms like they can be an online gamer, blogger, and many more. For example, nowadays some online games earn through live streaming on YouTube. Furthermore, doing business is a very common goal for today’s student and it does not need any type of qualifications.
Another pivotal aspect of the argument is that education is a basic fundamental of humans behavior. It shows the status of our literacy ration as one popular proverb goes” education begins a gentleman, conversation completes him”. Moreover, without education how can people get doctors, engineers, lawyers, and many other educational qualifications.Because these people’s jobs are essential for society. To educate people to have the knowledge to learn any kind of skill. Additionally, education helps us to expand our limitations of  knowledge
In conclusion, agglometating all the elaborated above it can be recapitulated that both arguments have own importance so as my opinion, paranta should give choice to their children what they want to become and what are they interested in.

Describe an important piece of news that you received via text message.

and explain why the news was important to you.

Human is a social animal who interact with different people on a daily basis.  Nowadays only personal meeting is not important for communicating with others we can also send messages and connect through social media with the help of the internet. I also receive lots of messages emails on a daily basis from my friends and family on my mobile phone out of which I find some messages useful and worthwhile whereas some not so much important. But here I would like to talk about important news which I received via text message. It was about four months ago when I was planning to go to my maternal uncle’s house who is living in Ludhiana. I had shared this plan with one of my friend her name is Aman. After 2 days I received a message from her that our government has going to do a lockdown for one month due to worldwide epidemic Corona. She also informed me that it is a very contagious virus because of which lots of people in Italy and America died with infection in the lungs she also told me that this virus comes from China and become a threat for the whole world so for fighting with this epidemic. Our Prime Minister Mr. Narendra Modi has announced the lockdown because of which no person is allowed to go outside as well as all the bus train and taxi services are banned due to which no one is allowed to go anywhere. Moreover, she also said that he has taken the decision that only medical shops and grocery shops can be opened only for 5 hours, and the person who visited there should maintain proper social distancing. After getting this message I was very upset and decided to quit the plan. So this was important news that I received via message.

Follow-up questions for cue card describe an important piece of news that you received via text message :

1. Why is it that some people today dislike sending text messages?

Ans Some people don’t like sending messages Because on messages people understand the message in the wrong way and they can’t get immediate feedback from it so they preferred to personally interact with people.

2. What’s the information that Cannot be Communicated through text messages?

Ans  The information which is sensitive and only related to that particular person and can’t be shared with any other person. So this type of information cannot be communicated through text messages.

3. What do you think about classic paper mails?

According to my opinion, it also has its own importance but it also has many drawbacks like as it can be easily destroyed and it requires more care to preserve it for future reference.

4. Do you think a good way to Deliver information is using mails?

Of course, it is the best way to deliver information via email because it is easy to use as well as also can be saved for the future.