The pie chart below shows the comparison of different kinds of energy production in France in two years. 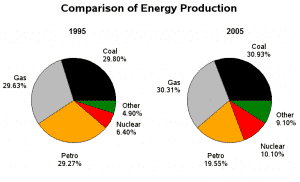 The given pie chart elucidates various percentages of resources used for the generation of electricity for the years 1995 and 2005 in France.

In France, for two periods, coal became the best alternative to generate electricity. The percentage of coal used for both the year is almost the same with 29.80% and 30.93% for 1995and 2005 respectively. the same phenomenon reflected for gas with nearly up to the same percentage quantity used for generation of energy. The generation of energy from nuclear placed an increment in demand with about 4% between both years from 6.40% to 10.10%.

overall, the priority of every resource remained the same or got change with slight increment but petroleum as fuel started degrading as a fuel for generating energy.

Yesterday you read news about someone whom you know personally. you found some information is wrong. write a letter to the editor to inform about it.

3-  what do you expect from the editor to do?

Write at least 150 words. You do NOT need to write any addresses.

Begin your letter as follows:

I am writing this letter with reference to your news article published in yesterday’s newspaper on May 18th with the title of “Student’s Success” on Ms. Arti’s successful academic journey. I appreciate the attractively written narrative of the article that has highlighted the key factors of a student life leading to success, portraying examples of a student from a low-income family. Personally, I know Ms. Arti since her childhood as me and her father are good friends for so long.

I would like to highlight an error in the article. Ms. Arti was born in a small town of Sindh and got her basic education there before moving to the United States for higher studies, whereas, your article mentioned that she was born and brought up in a metropolitan city of Karachi.

I believe you can publish a correction statement in the next issue of the newspaper under the “Letters to Editor” section since it is important and a key aspect of the life of students growing from small towns.

You should write at least 250 words and spend about 40 minutes on this task.

Many things that used to be done in the home by hands are now being done by machines? does this development brings more advantages or disadvantages??

Technology is an important development by human beings for better survival in the world. Today many types of equipment are made in order to reduce men’s effort and to do the work as fast as possible. But the invention of technology in it has many advantages than disadvantages. I shall like to discuss such points associated with it.

As we know today technology is one type of essential thing for human beings as no one can live without it in today’s world. Many things today which were conventionally done are replaced by well-developed machines. These machines directly co-relate to human beings in terms of effort and this suddenly reduced to around 2%. Also, machines in household purposes made the person self dependable. Further, machines are operated by some other means and so load can be given more than given to a human being.

Moreover, with increment in load also time allowance is made shorter to complete work faster and with good quality. Machines are mobile and compact so can be placed in a house in a lesser place too. This is the biggest achievement as it removes the requirement of a special workplace for particular work. Machines are self-reliable so no need to assist them for every time in fact they work with their own intelligence stored in them.

However, as everything has its own limitation, machines are disadvantageous to human beings by some means also. the biggest limitation is human being transferred into the lazy one. As machines are well equipped with technology the cost of such equipment is also very high. Machines need special connections and power sources which is the biggest source of pollution which is observed indirectly. Also as machines are self dependable they use maximum resources for any type of work and there it leads to wastage of it.

Hence, in conclusion, machines have made life easy and practical so that people can survive in this fastest-growing world. Avoiding a small number of bad points, it helps the human being to prepare for the stuffs which are helpful for their tomorrow’s world.

1. What the film was about?

Today there are many resources for entertainment like playing games, watching movies reading books etc. but today the world bends towards web series and movies they show something which is very fascinating. today I would like to speak about one of my favorite and astonishing film, its name is Tanaji- the unsung warrior.

2. When and Where you watch it?

This film got released last year in November and i watched it in the theatre. It was a fantastic movie, actually on that day me my friends stood up and clapped for the movie. it took me to the peak of my happiness.

the film was based on one Marathi worrier which died for the swaraj as it was like their heart in Maratha society. the story was against Maratha and Mughals who want to make their one capital in the south of India in Kohana. the bravery, the expertise allowed me to think about how the people over the last decades were courageous for their land and for their capitals.

4. Explain why it made you think a lot.

the thing made me think from the film was how one was respecting his friend as he was the king and respecting the ladies in the film. also a film made the children make strongly chartered and fight for the truth as there is truth there is a winning situation. such consequences felt me that how people and people which such bravery, also how they plan without any resources and fights for the battle, and wins the battle without any great instruments. the main thing I felt was that how people live their life freely without any hesitation for work or any other kind of stuff. so from that point, I decide to speak the truth and fight if I am truly at any point aslo drive others on the same road