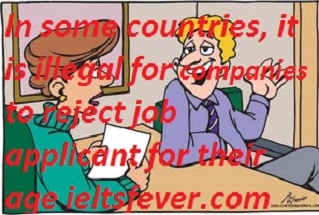 In some countries, it is illegal for companies to reject job applicant for their age. Is this a positive or negative development?

Age discrimination occurs when a decision to hire is made on the basis of a person’s age. There could be a reluctance to hire young workers on the basis of lack of experience, or there could be a bias against older workers. I believe that this is a positive development. In the following paragraphs, I intend to support my views with my arguments.

My first argument is that age is not necessarily an indication of inferior ability or potential. Therefore, treating a person less favorably purely on the basis of their age is very unreasonable and unfair. If a particular elderly worker truly has, say, less concentration or manual strength than a younger worker, and this makes him less qualified for the particular job, then employers can still make their decisions based on his relative lack of suitability for
the job not on his age. Age by itself should not be a determinant.

ALSO READ Some people argue that companies and private individuals, rather than governments

Secondly, age discrimination reduces productivity because job and advancement opportunities are inefficiently matched to workers and talent is wasted. Higher participation rates among older workers lead to better matching of jobs to people, increased employment rates, and enhanced competition among workers that will stimulate the labour market in the longer run. What is more, if the elderly are discriminated against on the basis of age then it would cause a strain on public resources because the ageing population is largely a dependent population.

Finally, discrimination discourages potentially talented job seekers from applying. As a result, employers lose by having a smaller pool of workers to choose from. In societies that celebrate youthfulness above all else, even highly qualified professionals resist from applying for new openings after the age of 50. In some cases, the fear of age discrimination has led to an increasing demand for cosmetic surgery.

To put it in a nutshell, I pen down saying that, having a legislation against age discrimination while hiring is a positive development because it is fair, it adds to economy and employers have more choices while recruiting.

ALSO READ Some people tend to take temporary jobs (they only work for few month of year), for they have time to do other things