there are many laws implemented by the constitution of our country for the smooth running of the life of people in society state and the nation without these laws, the life of the people could be indulged into utter chaos.The law about which I am going to take about is the law of female foeticide.it is the law which comes into existence near about two decades ago.people kill the female child before their birth and this is due to the eagerness to home a male child.people home made their mentality that only male child can become their heir.this tradition is continuing for centuries but governments come to alert when the ratio of male and female become disturbed in the country.There is a less female child in comparison to a male child and this is an alarming situation once a time come when this ratio went to its lowest level of 1000:937 in Punjab.Then the governments felt the intensity of this problem the main force behind this problem which increased its intensity is the hospitals people come to know the gender of the child before their birth with the help of doctors then the goverment reached the root case of this crime and they made a law that no one home the right to know the gender of the child the governments mentioned in this law that there will be a non-bale imprisonment and a huge fine to doctors who would be caught controlled to a large extent and this whould be beneficial for the females of the country.
( Gagandeep Singh Kahlon)

Some countries have introduced a law to limit working hours for employees. Why is this law introduced? Do you think it is a positive or a negative development?

Society is based on rules and laws. If individuals were free to do whatever they want to do, it could not function. To what extent do you agree or disagree? 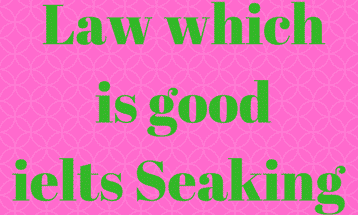