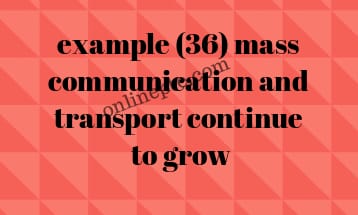 As mass communication and transport continue to grow, societies are becoming more and more alike leading to a phenomenon known as globalization. Some people fear that globalization will inevitably lead to the total loss of cultural identity.

To what extent do you agree or disagree with this statement?

Give reasons for your answer and include any relevant examples from your own knowledge or experience.
Write at least 250 words.

[shc_shortcode class=”shc_mybox”]Globalization means that in some ways people around the world are becoming
more and more similar. We often eat the same food, watch the same TV programmes,
listen to the same music and we wear the same clothes. Some of this at least can be
blamed on the spread of multinational brands available all over the world.
On the surface, it may appear as if the global diversity of cultural identities is being lost.
If, the argument goes, people in Tokyo and London look and dress the same, then that
must mean that cultural differences are disappearing. However, I would argue that this
is a very narrow definition of culture and that in fact cultural differences are as present
as ever. Cultural Identity is built on far more than just the films we watch or the jeans we
wear. The foundation of cultural identity is shared values. When you look in detail at
different cultures, you realize that the things that are important to one culture can
be very different from the things valued by another culture.
Take my own culture, India, as an example and compare it to a very different culture,
Japan. Although I have never visited Japan personally, I believe that it is a culture which
places a lot of value on hard work and that people often work very long
hours. The Indian people, in contrast, greatly value their leisure time and strive to spend
as much lime with their family as they possibly can. Even if we consume the same
products, I would argue that there
are still some very deep-rooted differences.
To summarize, I do not accept that that total loss of cultural identity is inevitable,
despite the influence of large companies
and their products around the globe.[/shc_shortcode]