Home ACADEMIC WRITING TASK 2 Modern societies need specialists in certain fields, but not in others. some...

Modern societies need specialists in certain fields, but not in others. some people, therefore, think that governments should pay university fees for students who study subjects that are needed by society. those who choose to study less relevant subjects should not receive government funding. would the advantages of such an educational policy outweigh the disadvantages?

In every country, there is a fashion among students about which subjects are the best to study at university. sometimes the popularity of a subject is determined by how much money a graduate could subsequently earn in that field. or subjects that are perceived as relatively easy may also become popular, in spite of later difficulties of finding appropriate employment. it is up to the governments to give incentives to students to choose subjects that match the needs of their society.

Obviously, one way to do this would be for the government to pay the fees of those choosing such subjects. the advantage would certainly be that a higher number of students would enroll and would later fill the employment gaps.

However, the disadvantages of such a policy would be considerable. for example, the students attracted by the funding may not have any real interest in or aptitude for that subject. such students may drop out before graduation or after working only a short time in a related job. furthermore, funding one group of students but not others would penalize those with a genuine interest and ability for another field. such discrimination would certainly affect the whole of higher education of the country and students would develop very negative attitudes towards going to university altogether. this would be very counter-productive for any country.

In conclusion, there are many other incentives for students that could be considered, such as making the course more interesting to take, or the job rewards greater after graduation. the education policy proposed above, however, would certainly have more long-term disadvantages than benefits for society.

The only way to reduce the amount of traffic in cities today is by reducing the need for people to travel from home to work, education, or shopping. to what extent do you agree or disagree? 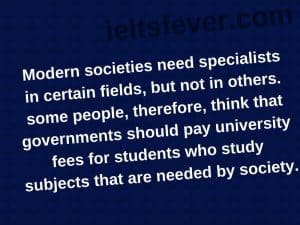 dern societies need specialists in certain fields, but not in others