The plans below show the site of an airport now and how it will look after redevelopment next year. Summarise the information by selecting and reporting the main features, and make comparisons where relevant. 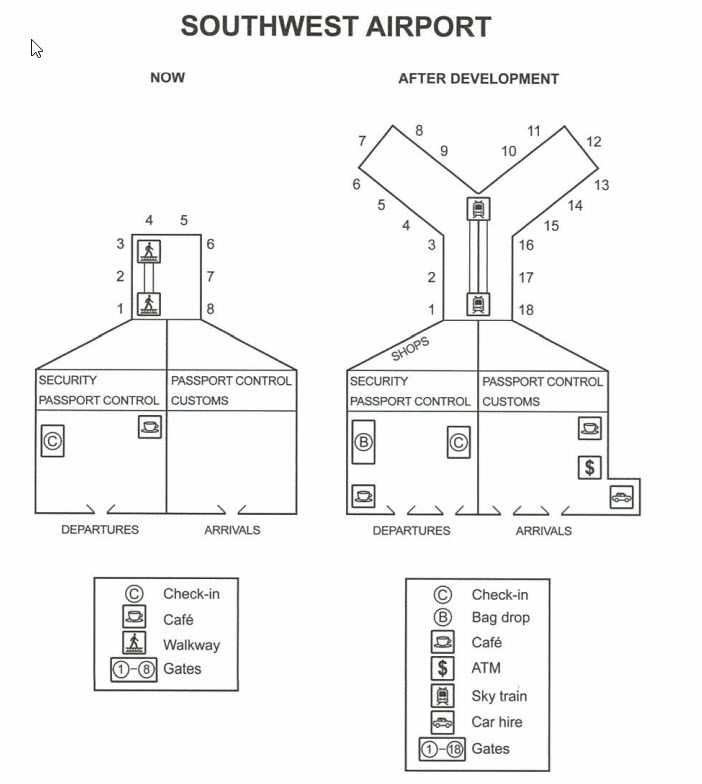 The yielded maps show an airport layout in the present time and proposed changes next year after advancement. It can be seen that a host of changes are planned for the future. The principal change will be on the north side and entrance.

Currently, there are two divisions, arrivals and departures and have a single entrance; on the arrival side, after the hall have a passport control for customers, whereas on the departure side, in the hall where check-in is on the left side and cafe on the top right corner. Follow by the north way is security passport control. Additionally, passport control has some space, and the north side has a square shape area. in the centre, has 8 gates as well walkway is on left side

After development, departures and arrivals entrance numbers increased to two. On departure side, check to take the place of cafe whereas, bag drop will check-in and cafe will replace to south-west corner. On the arrival side, the area will expand and construct car hire. East wall ATM and cafe also take place.

Furthermore, passport control will be the same as now although ahead of it shop will construct. North way six gates remain the same; however, six will develop in north-east side and same will on the north-west side. Middle of it sky train build.

Also, Read The Chart Below Shows the Unemployment Rate