Or talk about a noisy place.

Or talk about a crowded place.

Or talk about a memorable event you have seen.

Or talk about a situation when you were excited

Or Talk about a situation which made you really happy

This was indeed a memorable sports event.  I would never ever forget it.

Some sports are extremely dangerous but many people still like them very much. Why do people take part in dangerous sports give some suggestions on how to deal with dangerous.

As mass communication and transport continue to grow

Government needs to spend money to encourage the development of sport and art for school students, rather than to support professional sports and art events. Do you agree or disagree? IELTS exam 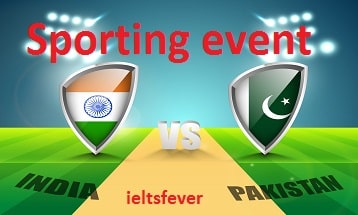