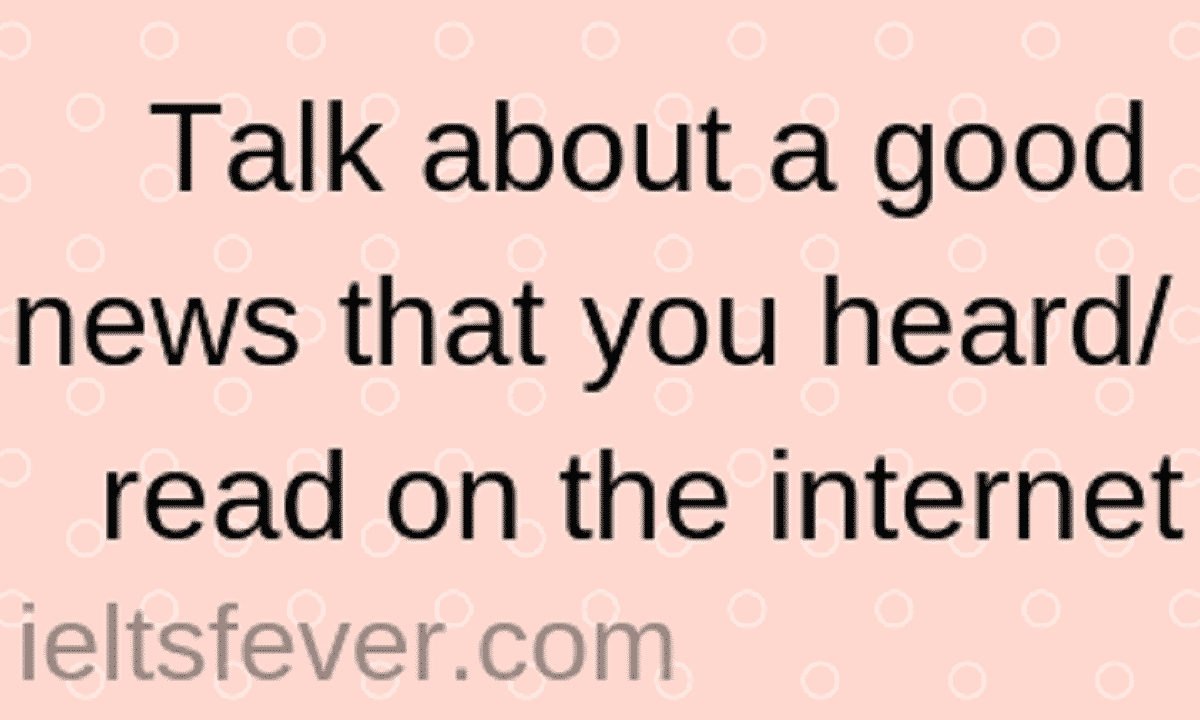 Talk about the good news that you heard/ read on the internet.

Well, we cannot deny the fact that good and bad news both are an integral part of each and everyone’s life. I am not exceptional from others. I also received so many good news in my entire life. However, here I would like to talk about a news which I received one year ago about a new member entered in my family. I will explain it briefly.

I vividly remember that. Last year, I was watching a TV with my family. Then suddenly my phone rang. It was an international call from my cousin’s brother who had been living in Australia for ten years. I received the call, and he congratulated me. I was so surprised because I did not know why he wished me.

After that, I asked him the reason for the wish. He retorted me that he had blessed with a baby girl in the morning. I felt Jubilant after I heard this news because I became the aunt of a beautiful angel. This news was extraordinary for me as she was the first baby of my cousin brother.

I put my phone on hold and called my parents as well as gave that news to them. My parents got emotional after I heard this news because he was far away from my brother and sister in law. So it means we would not be able to see the baby. In the last, my mother and father give blessing to both( mother and baby)

The next day, I informed about this news to my kith and Kin through the social networking site. We also organized a small party at home to celebrate the welcome of a girl child. I invited my near and dear ones and cut the cake as well. We are all connected with my cousin through video calling, and everyone gives a blessing to the child as well as their families.

All in all, that was a piece of great news that I received recently and felt over the moon.

Although good news and bad news both are an inseparable part of each and every human’s life, worse news makes a person gloomy. I have heard a plethora of news in my whole life and here I would like to talk about a piece of news which I have heard on television as well as in the newspaper just a few months ago. That news was related to a new path that is going to open from Punjab state’s one border to a famous Gurudwara Sahib named Sri Kartarpur Sahib Ji located in Pakistan. I explain it briefly.

Approximately four months ago, during the evening time, I came to my home from my locality park. I sit in the T.V. room for relaxation. Then, I suddenly took remote control of Television and switched on it. I was watching a news channel named “Sahara News24”.  An anchor was speaking about a very popular matter, a matter of opening a way to Gurudwara Kartarpur Sahib from Punjab border according to a request of Sikhs. Because all Sikhs were seeking it for many years.

After watching it, I informed all members of my family about this news. They were also felt pleased. On the next day, I read the same news in a Newspaper named “Punjabi Jagran”. A huge article was published in that newspaper. I read it properly and felt excited. I am really thankful to Prime Minister Imran Khan for this kindness.

All in all, that was a piece of good news which I heard on the television and felt highly elated.

Well! I heard a lot of news till today from which some are happy and others are not. Here, I would like to talk about the good news that I heard a few months ago. A couple of months ago, the national budget has been placed in the national parliament of India and in this budget, it was mentioned that the prices of all electronics products will be reduced. And here, I have been planning for long to buy a laptop for my personal use.

Furthermore, before the budget, the price of every electronic product becomes a bit unstable. So, when I heard about the new budget and the price reduction of electronic gadgets, it made me happy. As I already mentioned that I am a student so it was a little difficult to buy such an expensive thing which is really required for several motives. So, I told my father about decreasing prices, He also felt immensely glad and gave me permission to purchase it.
Moreover, the budget was presented in January month, it was really a good time to buy a laptop. Because I had two months for preparations for my exams. By having a laptop, I can be prepared for my exam very well. So, we went to the shop, and buy a laptop of a reliable company in our budget. I also told about this to my friends Because two of my friends were also seeking for it. But due to the higher price, they can’t afford it.

In this way, the budget announcement that I heard on the internet became beneficial for me and also made me happy a lot.

Question: is it important to read the news?

Answer: yes, it is the best way to get knowledge about the local areas as well as, world. Folks also alert about the crime rate and educational improvements. news give the updates related to the government. for example: in New Delhi electricity rate very down as compares to other cities after the new government.

Question: what kind of news do people in your country like to read?

Answer: in my country India all types of news are popular in all areas and they read agriculture news, sports news, political news, weather updates many more but, Indian folks are more interested in political news because they know about the new rule regulation and development of the country.

Question: Are young people and old people interested in the same kinds of news?

Answer: according to me, both age groups have a different choice related to news . young people mostly like to read sports news and know about the celebrities with it, old age group is totally opposite. they prefer to read political, agriculture and traditional news, but both are read news in routine and free time.