The bar chart shows the number of overseas students enrolled in a third-year Computer Science course at a Canadian college. 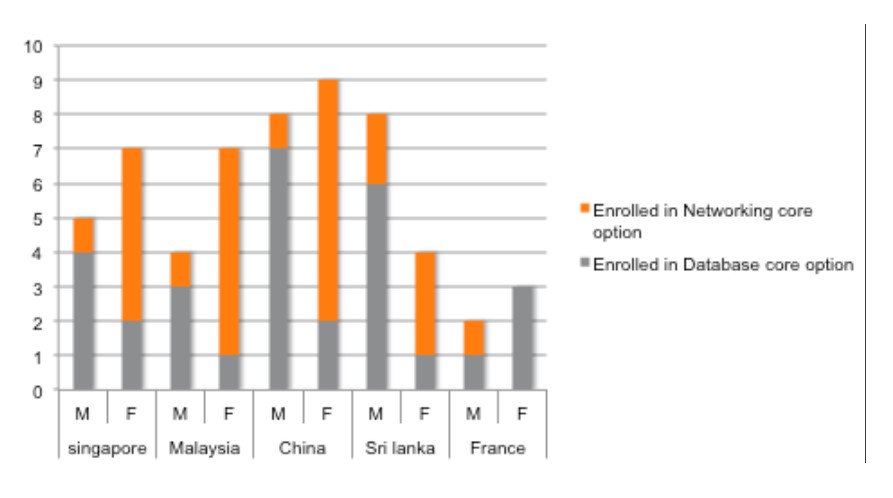 The bar chart illustrates the comparative statistics enrollment of two options in the computer science course offered by Canadian Universities, by male and female students of five countries. Each bar is demarcated in networking core options and database options of five counties for both genders.

Singapore bars show that the females are enrolled more for networking core rather than database core while the male’s shows reverse the trend.  Malaysia depicts the same model as of Singapore. On the other hand, the tendency remains the same for China also, but China differentiates from Singapore and Malaysia, from the highest numbers of students gets admitted into the course.

Sri Lanka illustrates an entirely different pattern, as the number of male aspirants approximately double to the number of female students. If we look to the data of France, it surprisingly shows the minimum number of candidates who are willing to get admitted to the Canadian University, and also females are entirely enrolled in the data core option of the course

The bar chart depicts how many international students joined at a Canadian college in the computer science course.

Form an overall perspective; several Chinese students were higher as compared to other nations’ students. On the other hand, students of  France were at least at a Canadian college.

This is the end of academic writing task 1: (The bar chart shows the number of overseas students enrolled in a third-year)