The chart below shows the number of men and women in further education in Britain in three periods and whether they were studying full-time or part-time. 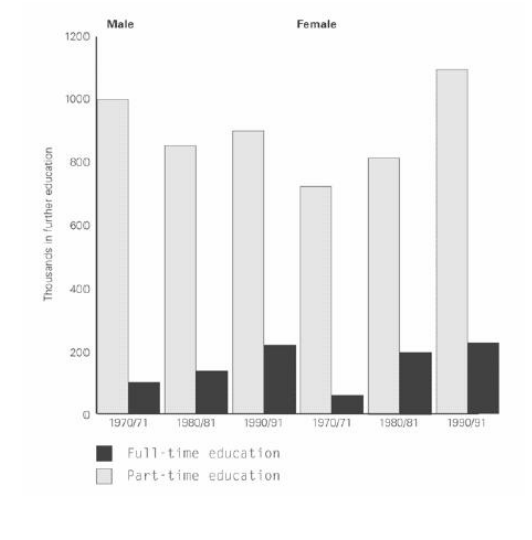 The bar chart represents the information about the number of males and females in full-time and part-time education in Britain from the year 1970 to 1991.

Overall, the maximum  number of males and females who study part-time education from the year 1970 to 1991 in Britain.

The bar graph illustrates how many  British males and females were studying full-time and part-time higher education in three distinct time periods from 1972 to 1991.

Overall, the majority of students enrolled themselves in part-time education and both genders in this education showed an upward trend. Moreover, the number of males in full-time education decreased over the period given, while for females it escalated, with the highest change noticeable in 1990.

The number of undergraduates in full-time time education was by far higher than part-time ones, with a significant 1 million adult boys in 1970 / 71 and approximately 750,000 adult girls in the same time period. After a decade, the male ratio experienced a drop to just over Eight Hundred Thousand, whereas the female ratio witnessed a slight increase to share the same platform( 800,000) with their male counterparts. By 1990-1991, Women’s figures had experienced a sudden rise, increasing from 800,000 to near about 1.1 million, but the male’s number had only grown slightly, amounting to nearby 900,000.

this is the end of academic writing task 1( The chart below shows the number of men and women in further education in Britain in three periods and whether they were studying full-time or part-time.)