The charts below give attendance figures for Grandville stadium from 2017 which are projected in 2030 after a major improvement project. 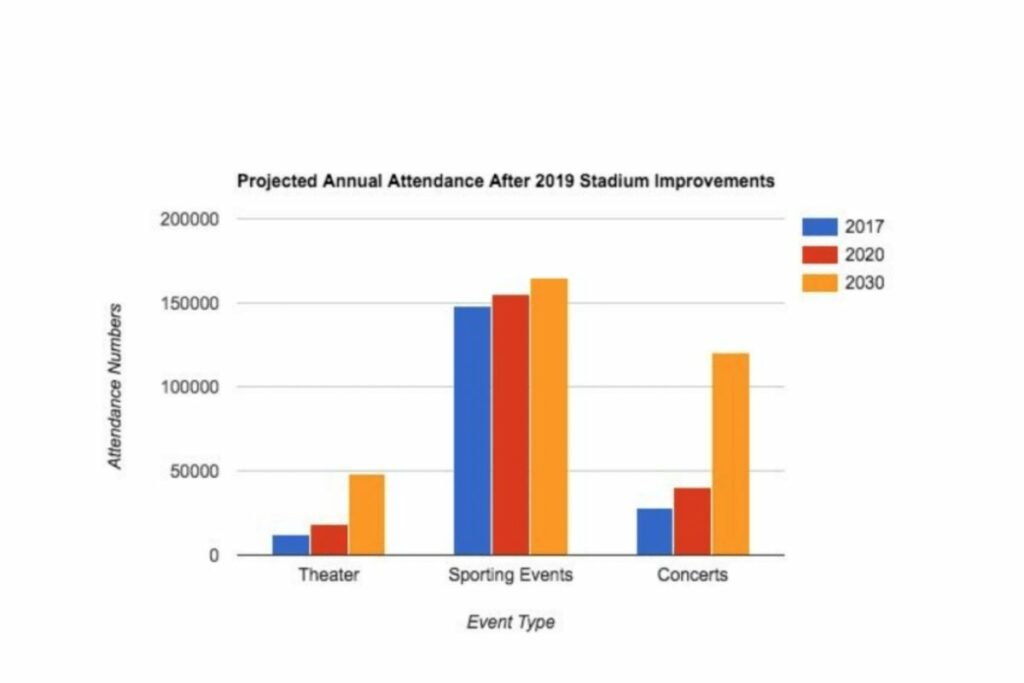 The column graph illustrates the information about three events, namely, theater, Sporting, and concert, attended by a number of people in 2017 and 2020, and also gives prediction for 2030 after improvement.

Overall, the predictions indicate that after development the number of attendance figures for all three events is increased and in the future also, it will increase rapidly. Moreover, the majority of audience like to attend Sporting events than concerts and theater.

In 2017, around 10,000 people attended theater event and in  2020 in this figure increased slightly, with 15000 audiences, but after development, the prediction shows that this figure increase rapidly and by 2030 it is predicted to reach 5,000 people. For a concert, around 20000 and 25000 people attending a concept in Grandville Stadium by 2017 and 2020 respectively.  However, in 2030 the number of attendance figures is projected to increase rapidly and it is predicted to reach a peak level, with around 1.2 million audiences.

It is interesting to note that, around the equal number(1.5 million) of people attended Sporting events in a stadium in 2017 and 2020, and in the future, also these figures are increased with 1.7 million audiences in 2030.

The bar chart illustrates how many people have visited the Grandville stadium in 2017, and it is forecasted the figure of attendance in 2030, after a significant development project.

From an overall perspective, it is clearly seen that sporting events are considered to be the main attraction for people at the Grandville stadium in all the time periods. On the other hand, there will be a dramatic increase in attendance numbers for theater and concert events.

At first glance, sporting events had more attendance at nearly less than 150000 in 2017, as compared to the other two events. In 2017, the number of attendance for theater about 10000, whereas at the same time, the figure for concerts was about approximately 30000. In 2020, the number of attendance for three events is gradually rising than in 2017. Regarding the attendance numbers in 2020, it is consists of around 15000 for theater, and little more than the figure of theater for sporting events, and almost 40000 by concerts.

Moreover, in 2030, it is predicted that almost 45000 people will attend the stadium for theater events. For concerts events, the attendance numbers will be reached at 120000 in 2030. In addition, sporting events will be considered to the highest number of people visit the stadium with nearly 160000 in 2020.