Describe a person you never met but heard a lot

Who he/she is
-what is special about him/her

Where you heard about him/her
– and explain the quality of that person.

Well, there are a plethora of people in my to-meet list with whom I want to meet such as Punjabi singer Ranjit Bawa, pop star Justin Biber, cricket star Virat Kohli and so on. But here I would like to talk about a person named Aamir Khan to whom I want to meet as soon as possible.

Aamir Khan is a Bollywood star. He is a successful person in India. I have searched for information about him on the internet. I describe it briefly. Aamir Khan’s full name is Muhammed Aamir Hussain Khan but he was widely known as Aamir Khan. He is an Indian film actor, director, filmmaker, and television talk-show host.

Through his thirty-five-year career in Hindi movies, Aamir has established himself one of the most popular and influential actors of Indian cinema. He has a large global following, especially in Southern Asia and Greater China. Khan is the recipient of numerous awards, including nine Filmfare Awards, four National Film Awards, and an AACTA Award, as well as an Academy Award Nomination.

Apart from it, he was honored by the Indian Government with the Padam Shri in 2003 and Padma Bhushan in 2010. He has received an honorary title from the Government of China in 2017. Moreover, if I talk about his personal life, Aamir is a down to earth human being. He talks to everyone with patience and respects his followers. He earns a big amount of money by acting in movies every year but he donates money to needy people.

For instance, he has established a Charitable trust which donates money to hospitals, schools and so on. Furthermore, Aamir hosts a TV show named “Satayamaive Jayatey”. In this show, he invites those persons who are convict of the cruelty of the human race and become able to fight with this cruelty. Aamir listens to their grief’s story and helps them. As well, He requests to other people through this TV show for the help of convicts.

Eventually, he is the perfect human who cares about humanity with love. I have heard a lot about Aamir Khan but I have not yet met him. So, I want to meet as well as talk to him.

Well, there are a number of people of whom the success stories are gone viral and the new generation follows them as their role models to be successful in life. Similarly, I also have a role model in my life to whom I never met but heard a lot more about him. After hearing his stories and his life struggles, he has become my role model. I would like to talk about him briefly.

The name of this person is Mukesh Ambani. He is a businessman. Not only in India, but his name also comes first in the list of all businessmen of Asia. I never met with him in my life but heard a lot more about him. He is the person who has traveled from 0 to peak point in his business career. He had started his career with some rupees. But with his tricks, understandings, team planning, now he has become one of the top businessmen of India.

His business strategies are totally different than the others. He uses some strategies that boost his business and increase his revenue in just a few days. I know it is impossible to meet him but I have a wish to meet him once in my life.

Let’s take an example, in recent days, he had started his career in telecommunications services and open his company named Jio. He used his unique strategies and now the Jio cellular service has become the topmost company and it has sent his competitors to its extinction state. This example clearly shows that this person has a different mind technique to run business

Describe a foreign language you would like to learn ( Not English) 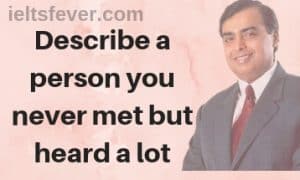