Recently abortion increases rapidly and becomes a controversial topic. Some people suppose that abortion should be legal while others are against it.

Discuss both these views and give your own opinion.

Give reasons for your answer and include any relevant examples from your own knowledge or experience.

Abortion rate increase day by day as compared with past. Some segment of people claim that it should be legal and individual should make a decision about it my own. However, other counterparts of society think that it is in humankind so it should be banned for everyone. It is a quite sensitive issue. Both arguments need proper scrutiny before forming an opinion.

Going with the first school of thought, they think that some persons are not financially strong to take responsibility of a new child so they choose abortion and according to them, It is a good way to control the population. Apart from this, sometimes during pregnancy, some serious complications occur that prove the very detrimental effect on baby growth and development So in that case, abortion help to save a mother from her life risk. Thus, it should be legal to save pregnant women as well as for serious situations only.

On the other hand, some human beings are against it, they argue that it is an inhuman and cruel activity which is done by people. It is not fair to die a child before their birth because they have full right to live and there is no matter whether they are a girl or boy. Moreover, abortion is the main causes of some health hazards in women. They become physically weak and mentally sick after abortion. Last but not least, spouting this activity is totally against our culture so it should be banned from society.

To conclude, according to my point of view abortion is an illegal activity and it should not get permission to be legal. But if there are some serious situations when medical treatment requires to do an abortion for saving one’s life only in that situation it should be legal. 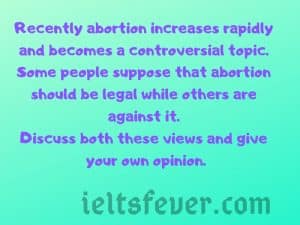