The diagram below shows how the Australian Bureau of Meteorology collects up-to-the-minute information on the weather in order to produce reliable forecasts. 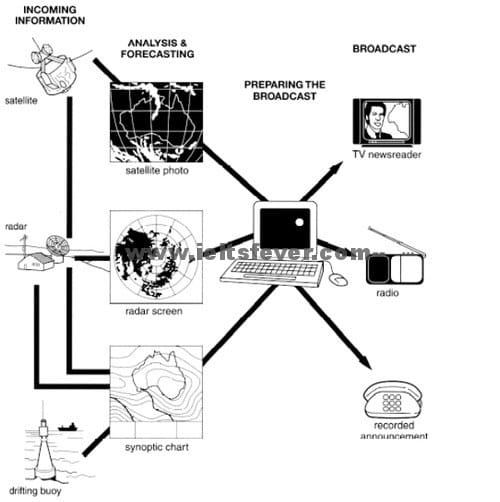 sample answer Of(The diagram below shows how the Australian Bureau of Meteorology) :

The diagram gives information about the Australian Bureau of Meteorology which gets information regarding weather in order to demonstrate reliable forecasts.

Overall, the process involves four main steps in order to predict reliable forecasts, which include incoming information, analysis and forecasting, preparing the broadcast, and broadcasting.

It can be clearly seen from the graph that, there are three sources of incoming information. Firstly through satellite, Australian Bureau collects weather information after that information is analyzed and forecasts through the satellite photo Then after the computer is used to prepare the broadcast and then after the information is telecast through TV newsreader, radio, and recorded announcements. The second method of collecting weather details is through radar, in which a radar screen and synoptic chart can be used for analysis and forecasting, and then after the broadcast is telecast through television, radio, and recorder.

The last and final stage to collect weather up-to-minute information is drafting Buoy.  synoptic chart Can be used to analyze and forecasts the information which is collected through drafting buoy and after preparing broadcast the data is forecast through television, radio, and recorder.

The given infographic representation, in the form of process chart, highlights the study of weather forecast by the  Australian Bureau of Metrology.

At first, information is sent by satellite . then, it goes to radar where they interpret the information into synoptic charts. Subsequently, it shows on the radar screen and have detailed satellite images and them analysis information which is given to them. Afterward, they make predictions regarding the information.

Finally, the information is ready to be broadcast by a huge computer server. Lastly, it broadcast by various methods such as the tv channels, radio and recorded announcements by government and it reaches to people of Australia.

Overall, it is a lengthy process to make a forecast about the weather and it has several steps. However,  make predictions and gather information via satellite and radar these are the two crucial part of the weather prediction.

This is the end of ACADEMIC  writing task 1 (The diagram below shows how the Australian Bureau of Meteorology collects up-to-the-minute information on the weather in order to produce reliable forecasts.)