The graph below shows the information on employment rates across 6 countries in 1995 and 2005. 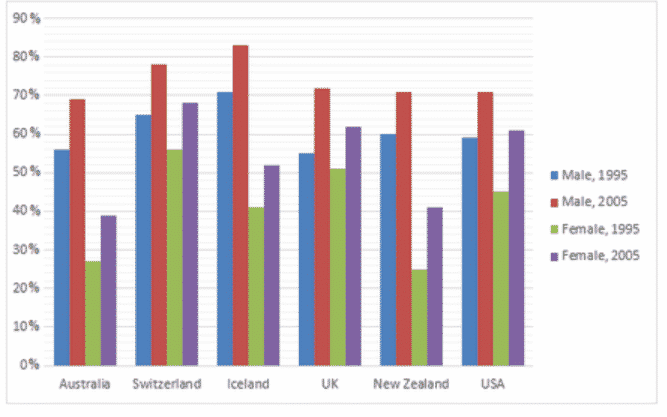 Sample Answer of The graph below shows the information on employment

The bar graph illustrates the proportion of employed individuals in Australia, Switzerland, Iceland, Britain, New Zealand, and the USA between 1995 and 2005.
Overall, there was an upward trend in the percentile of males and females, but men in all nations maintained their dominance over their women counterparts throughout the given period. The maximum number of working men was observed in Iceland, whereas an inordinate amount of women with jobs can be seen in Switzerland.
Considering the male figure, approximately 70% of Icelandic men possessed jobs in 1995, but these numbers had risen moderately to reach a zenith of near about 80% by 2005. Likewise, there was an average increase of 12% in the employment rates of Switzerland and Australia, growing from just above 64% (1995) to 78% (2005) and 54% (1995) to just below 70% (2005) respectively. Similarly, the ratio of businessmen in the UK, New Zealand, and the USA also witnessed a small rise of 12% and the figure rose from an average of  58% in 1995 to nearly 70% after a decade.
Moving on to females employment ratio, in Switzerland, it suffered an increase to peak at 68% (2005) from 56% (1995). Surprisingly, the proportion of working women in New Zealand and America grew modestly from roughly 47% in 1995 to share the same platform at about 60% after a decade. In a similar way, the percentile of Australians and New Zealanders had risen by approximately 13%, growing from near around 28% (1995) to nearly 30% after 10 years. The percentage of employed females in Iceland, which constituted just over 40% in 1995, escalated to 50% in 2005.

The rendered vertical bar graph manifests the information regarding the proportion of employed individuals in six nations namely, Australia, Switzerland, New Zealand, Iceland, Britain, and the USA, about one decade from 1995 to 2005. The data has been calibrated in percentage.

Overall, the striking feature is that the men had a better employment record as compared to the women throughout the given tenure. Moreover, Iceland and Switzerland’s employment conditions were comparatively better than the rest of the nations.

As is presented in the given bar graph, in Australia, more than half of the male was employed, in 1995, whereas its ratio was drastically increased in the next ten years. By 70%, Switzerland and Iceland’s men possessed jobs in 1995, but it gradually grew and Iceland’s men status reached at zenith point around 80% by 2005.

The percentile of employment rates in the UK, New Zealand, and the USA was more or less similar in the initial year, about 60%. However, after a decade, a significant proportion was observed in these three nations regarding the businessmen, was just below three quarter.

Further analysis regarding the females reveals that, in 1995, a quarter of women were employed for the job, in Australia. Whereas merely one-tenth of females were inclined in the next ten years. The females’ employment ratio was only 55% in 1995, while it reached 70% in 2005, in Switzerland. The percentage of working women in Iceland was just over 40%, in 1995. On the other hand, its ratio was escalated and reached exactly half.

The proportion of employed women in New Zealand and America rose slightly from 47% in 1995 and after a decade it consisted of 60%. In the UK, the percentile of working females was more than half whereas in the subsequent years its ratio increased only one-tenth.

So these are the sample answer of ( The graph below shows the information on employment rates across 6 countries in 1995 and 2005.)